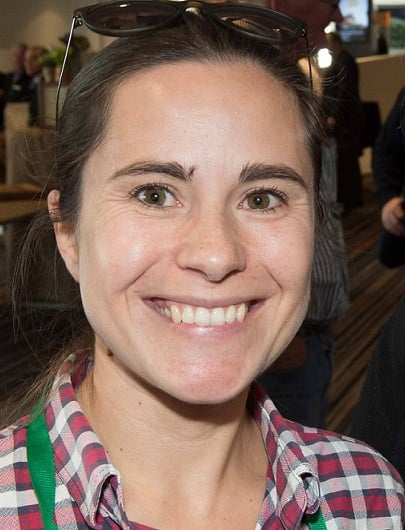 The island farmers paid more than a control group for fertiliser and markedly more for freight/selling, but the study found overall cost of production was only 1% higher, and this difference was recouped by higher income/DSE.

The exercise has also raised the possibility of a land-use study to boost farm margins.

Farming Together-appointed advisor John Francis from Holmes Sacket led the benchmarking study from October 2017 to last April, using 2016/17 data. The farms, a mixture of family and corporate-owned, ranged in size and land use.

Ana Pimenta, of the King Island Natural Resource Management Group, (pictured)  explained:  “We carefully analysed the financial data and key performance indicators for all 10 businesses allowing for comparison against every other benchmarking participant in the group and against the Holmes Sackett average and top 20% producers.”

Compared with the Holmes Sacket 16/17 average, the group’s average cost of production ($/Kg lwt produced) was 1% higher and the average cost of fertiliser ($/DSE) was 51% higher.

Freight/selling costs were markedly higher. The group paid an average $4.34/DSE compared with $2.79/DSE from the broader Holmes Sacket group.

Despite additional costs, the profit of the King Island group suggests that these costs are not affecting profit per DSE, due to an additional income $/DSE for the KI group.

The production/ha, ranged from 24.2 to 56.6 (kg lwt/ha/100mm). Ana said: “The upper limits on production were evident in the heavier country but less so on the coastal and semi-coastal. Establishing a land-type index could help establishing the relativity of production of coast land compared to heavier country.”

The Farming Together farmers also benefited from a visit to Flinders Island last February. “We networked with the 15-year-old benchmarking group there to understand the long-term benefits of benchmarking.

“Overall, I see this as a great opportunity for King Island businesses,” she said. “The data analysis shows that, most producers in our group have the capacity to be more profitable by implementing just a few changes to their business.”

Farming Together program director Lorraine Gordon said: “The study set the benchmarks for this group of beef producers. It showed them their profitability gaps and possible gains.”