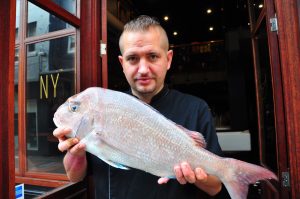 18 August 2017: A multi-hatted Michelin chef has become the latest fan of fresh-caught SA fish selling direct from the boat, through the national Farming Together project.

Pierre’s restaurant is the fourth high-quality Adelaide eatery to become a regular buyer of fish sold directly off the boat under the Fair Fish initiative of Wildcatch Fisheries SA Inc. Two more restaurants are due to sign up, said Fair Fish project officer Tom Cosentino.

“It’s the discerning chefs who are fighting over our fish. They are saying ‘I want to be the first to get your fish’. And they’re paying a fair price directly to the fishermen,” he said.

Only one month ago the group received $175,000 from the Australian Government’s Farm Co-operatives and Collaboration pilot program, known as Farming Together, to establish Fair Fish. They have since built up regular sales of 40kg/week, with demand constantly growing.

Tom and Pierre met through a mutual contact at the Adelaide University. “I looked him up online and found out he has worked with some outrageously famous chefs,” said Tom. “Pierre absolutely loved the snapper. When I dropped it off, he was straight into it, opening the box, examining the gills. He called all the other chefs over to admire it. He was like a kid on Christmas morning!”

Wildcatch Fisheries SA Inc represents 550 SA fishermen and women and aims to will deliver the freshest premium, local and sustainably caught seafood. The project is launching its website soon http://www.fairfishsa.com.au/ You can visit their Instagram site https://www.instagram.com/fairfishsa/

Farming Together program director Lorraine Gordon said: “Fair Fish is a good example of the way the program supports agriculture from the group upwards. The program is producer-driven and has attracted unprecedented levels of engagement. In barely 10 months we have had interaction with 16,000 farmers, fishers and foresters across the country and across many commodity groups.”