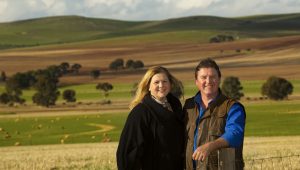 19 MAY 2017: An on-farm micro-abattoir service for small-scale meat producers is planning a major expansion mid-year … and farmers are invited to hear the story next month in Adelaide.

The husband-and-wife team developing the service say there is appetite among farmers hoping to collaborate to establish regional micro-abattoirs.

The shift is an extension of the ‘stress-free’ animal husbandry philosophy that saw the Lally’s Savannah Lamb brand score multiple state and national awards over recent years. The couple’s commitment to land stewardship also earned them numerous sustainability awards and they have been officially recognised as visionary leaders by the meat industry.

Michele (pictured above) will share insights into the project, as well as the background to Savannah Farm’s operations, at the Farming Together forum in Adelaide on June 6.

She said: “The new initiative is a response to demand from other livestock farmers keen to develop their own branded meat products but who are unable to secure space at their local abattoirs which can sometimes be up to four hours’ drive away.

“From operating our own, micro-abattoir, we have identified three groups who have so far show some interest in the plug-and-play-type design. The small-scale farmers looking to process small consignments at an existing facility, remote communities hoping to secure affordable local meat for their region rather than relying on high-cost low-quality meat deliveries, and, lastly, groups of farmers looking to collaborate to install a regional micro-abattoir so they can own their supply chain with more confidence.”

The Farming Together project has been helping farmers across the country form into groups to gain marketplace strength. Some are seeking ways to work more closely with their value chains for productivity and profitability gains.

Farming Together project director Lorraine Gordon said: “The Savannah Farm story represents the best of flexible thinking in agriculture. We look to their examples to learn how farming models can meet emerging social licence requirements.”

Since 2006, fifth-generation farmers Phil and Michele have transitioned the family farm in the Clare Valley to a chemical-free, eco- and ethically-focussed enterprise.

“We noticed a huge difference between the growth rate and happiness of stock that had been treated respectfully,” Michele said. “It started a whole new philosophy around stress-free stock handling in 2009. Stress-free animals produce the best meat because of the low acid levels in their muscles at the time of processing.”

Farmers from across Australia are expected to hear Michele and other mid-expanding speakers at the Farming Together forum. They will be hearing from farmers who have used the program to form or expand co-operatives and collaborations as well as experts, such as Michele, offering practical ‘how-to’ advice.